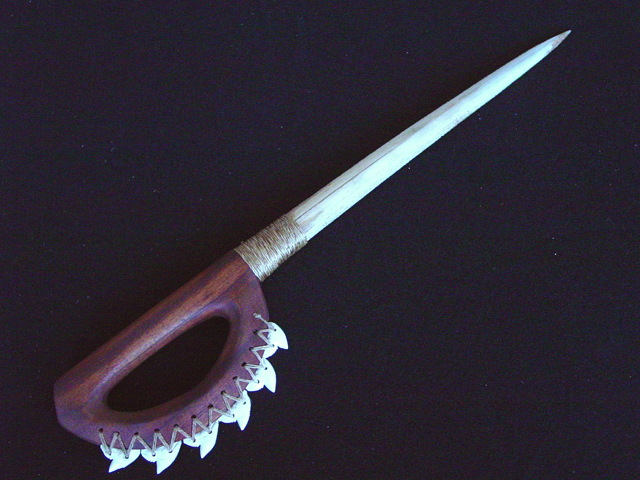 When the slow-moving board of army officers at Washington, comprising a board of selections of the War Department, to select a site for a great army post on the island of Oahu, it considered carious locations, and then decided upon Leilehua for the future Schofield Baracks cantonment, they probably had no idea that they were merely continuing the ancient “School of War” established in olden times by the Hawaiian chiefs.

And similarly the board members probably had no idea that the swift-descending slope overlooking Haleiwa, through which the Waialua Hill road threads its way from the Schofield Barracks to the sea, was called “The Valley Of Spears,” and that it, too, had a military significance.

In ancient days soldiers were taught the arts of war as now, but with very different weapons. Instead of bayonets for the coup de grace, they held a shark’s tooth in the palm of the hand, bound to the rest of the hand with olona fiber, and with this they disemboweled their opponents.

But in the absense of weapons, they learned another art, the lua–the art of dislocating the joints and rendering an opponent helpless.

Like all other arts, the lua was prostituted to become a feature of brigandage. While the young Hawaiians were taught at Leilehua the arts of war, including the lua, brigandage flourished on the hill slopes overlooking Waialua, and there the brigands waylaid travelers passing from Kou (the present site of Honolulu) to Waialua and beyond. The victims were disjointed and often put to death. One had to be wary in those days of traveling. The soldiers at Leilehua warned travelers of the menace beyond their borders, and advised them that if they would elude the spears of the brigands they must use wariness and detours.

And so the slopes and gulch became known as

The Valley Of Spears.