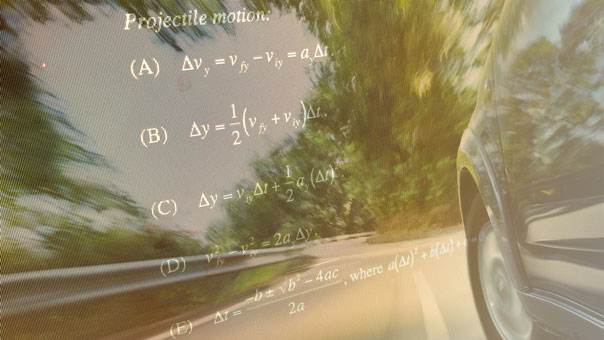 On Aug 4th 2013 Honolulu was rated the third most congested traffic city in America.
Traffic itself may seem to be caused by random elements at play…sometimes more, sometimes less.

If there is an accident = traffic occurs
If school is in session = traffic increases
If it’s summer break = traffic decreases
More freeway lanes = more throughput?

Are these the only factors controlling the eb and flow of traffic?

In fact, this a field of study called Car Traffic Dynamics or Traffic flow. Traffic dynamics attempts to use mathematical models with variations of speed density and flow to give order to the phenomena.

Without getting into framework of traffic physics, here are a few rules in plain text that attempt to dispel some of the mysteries of traffic flow.

1. TRAFFIC JAMS
The idea of easing a traffic jam by slowing down early and rolling through it is a well established on in the field of traffic engineering. Cars have powerful brakes and generally stop five times as quickly as it can accelerate back up from a stop. Once traffic stops, the second row of drivers cannot accelerate before the first row has already moved on. The result is that traffic jams move in waves that go against the direction of traffic and across gaps of about 50 meters or so.

The theory states that, once a column of car stops at a jam and stands still for a given amount of time, it will take five times more for it to return to flowing traffic. This builds up through the entire traffic jam as the cars stop and go. This style also results in increased fuel waste and a great risk of rear-end collisions.

2. MERGING
In many European countries, the driving culture is such that dictates that in areas where traffic merges from the right at an access ramp or from a blocked lane, it does so in a “zipper” fashion, where each car from the flowing lane allows one car to merge in before it and then goes. This allows the traffic to distribute 50-50 without hesitations and problems.

Trying to apply this method when you merge or allowing other cars to merge, is a good idea, even if one or two more cars jump on the oppurtunity and push their way in front of you.

Another good idea is to delay and smooth-out the merging action. The less sharper the angle in which traffic is merging, the easier it allows traffic to steam more freely. In merging left, the later you merge – the better. In merging right – the earlier you merge, the better.

So, as you get on the access ramp, don’t just push your way into traffic. Instead, identify the gap you want to merge into and accelerate down the entire slip road while merging at a shallow angle.

If your lane is blocked, you should apply the same approach, but still merge early enough so that you don’t need to slow down needlessly. If you merge too late, you will have to slow down or stop in front of the blocked part of the lane, which will make merging much more difficult.

3. LANE USAGE
Using the right lane as legally required does a lot to help traffic flow. In European countries where lane discipline is practiced commonly (due to higher speed differentials between lanes, as speed limits are much higher), you can see traffic flowing at speed in situations where in the US it would start to congense and slow down.

Keeping right and passing on the left is really important. Like with merging, lane changes should be gradual. When you spot a slow-moving vehicle, you should accelerate until you are just two-three seconds short of it, while merging at an angle. Once past it, with a clearance of about two-seconds of a following distance, you should immediately merge back right, again at a shallow angle.

4. EXIT RAMPS
The exit ramp displays the same principle as the access ramp, which is to seclude speed changes, i.e. traffic which is accelerating or decelerating, aside from the steady-speed flowing traffic on the main carriageway. So, just like you are supposed to use the whole length of the access ramp, you are supposed to tuck right into the exit ramp as early as possible, and start slowing down only once inside it and not on the main carriageway.

5. SEPERATION SPACE
The separation space between cars helps to reduce the so-called “anti-traffic”, better known as the professional term of “resistance.” When tailgating the car in front, you are in fact blocking your view at the road ahead and cannot see any changes in the traffic flow or any congestions or slow downs. Also, once the driver in front so much as dips the gas or touches the brakes, you will have to brake ever more harder to maintain your small space.

Drivers tend to bunch up, as if driving in a group. In these conditions, you can create a “chain reaction” which will form a mysterious “shockwave” jam hundreds of meters to the back. So, the solution is to keep two FULL seconds at least, and more when unable to stop as quickly or when the driver in front is blocking your view, or in bad road or visibility conditions, or when the driver behind you tailgates you.

Even if other drivers push their way into your gap, it makes little difference, because they will usually be only a few of those, and they usually leave you at least one full second of a following distance, as well as depart quickly and move on up the line. Even if two dozen drivers were to push their way in front of you and remain therein, the loss of time would be a mere minute!

The separation distance is also important at stops. It’s important to slow down and stop early to see that the car behind you, as well as the car or two behind it slows down and stops without shounting your behind. Stopping early allows you to move forward to free up some more space, as well as maneuverability to swerve aside, even to mount a curb, to avoid being shounting from behind. After they stop, you can move forward.

Even with a column of cars safely stopped behind you, it’s important to keep a good few feet, almost a full car length, free in front. Do this by maintaining such a space where you can see a few feet of tarmac separating you from the car in front.

When traffic congestion begins to build up, speed has to be reduced so that the jam is allowed to “free up” before more cars can be fed into it from behind. This is why some highways are monitored and have electronically determind speed limits, meant to prevent the traffic from stopping needlessly and to keep it moving.

7. AWARENESS
Being aware to what is around you is really important. You should notice traffic congestions as early as possible by keeping a clearance in front of your car and looking far ahead to the front of the queue. It’s also about checking the mirrors, interior and side mirror – frequently.

9. DECELERATION
Slowing down early, even if you do stop, is important because it gives you time to check your behind and allows to manage the traffic behind you and form a slow-moving column. If you slow down early enough, you will still be moving at speed when the car behind you catches up with you and when the car behind it catches up with it. This protects your behind and allows you to lead them through congestions.

In closing to quote the British mathematician Jacob Bronowski
“Man masters nature not by force but by understanding” In this understanding we may also appreciate the disorder and complexity of Traffic Flow.