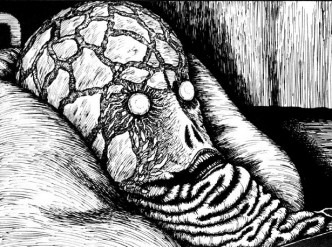 When I went to visit the Pearl City Mormon Church, I met a native there who told some interesting stories. One of these was the Eel boy of Pilimoo, a pool in Pearl City. This pool had an underground tunnel that led to the sea. For a long time there was no danger to the children that came to swim in the pool until a man-eating shark discovered the tunnel and slipped in and out at will.

One day, a boy went to the pool and disappeared, no trace was of him was found. His father was so worried that he went to consult a Makuala or prophet. The makaula asked his gods, who told him that it was the will of the gods to change him into a small eel, so that he could live in the depth of the pool and warn the children of danger.

The father of the boy went to the pool to see if it were so. He sat there a long time and neither saw nor heard anything. Then the children gathered at the opposite side of the pool from him and began to dive and play.

Suddenly he heard a whistle which sounded so like the whistling of his son when he went home every day after playing. “That sounds very much like my son’s whistling.” he said to himself. He looked around and saw nothing. The whistling was repeated. Then looking toward a ledge under some hau trees, he noticed the head of an eel. Every now and then it whistled. He drew closer to it and spoke to it, “Can it be that you are my son? How did your human body change to an eel?” The boy replied, “Yes, I was once a boy, now I am an eel because the gods have willed it, so that I may save human lives from the wicked sharks of the deep that come here. Go and tell those children to go home. Tell them to listen and if they hear whistling that is a warned that they are in danger.

The man went as he was told to do so. He told them to listen for a shrill whistle every now and then. That was a signal to go away at once.

The eel whistled again so loudly that the children heard him and went away. The father remained to see if a shark would appear. A little while later he saw the dark form of a big shark swim about in the pool.

So it was that ever after, a whistle was a signal that danger was near.