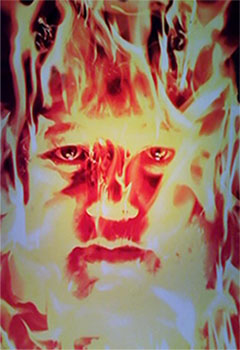 Are comics a valid representation of Art? This has been argued throughout the decades of the last century. I had a chance to discuss this very question and more with who I like to dub “Hawaii’s Socratic Artisan,” Allen Wilson.

Tell me about your art style and how long you have been doing it?

Ever since I can remember, I’ve had some form of art or at least exuberant expression in my life. My parents are from the “Baby Boomer” generation and I take pride in the fact that (unlike other generations) most of what they passed down from their pop culture was inspirational, soulful and ground breaking for its time. Between my early exposure to The Beatles, classic rock, soul music, blues and amazing animations like heavy metal, and fire and ice, and my “comic books galore”, I had a multitude of sources for my foray into expressing myself.

All these influences are responsible for my love of art that doesn’t need to cater to a society to be beautiful. The art I enjoy the most comes from a place of counter culture and thought provocation, but also doesn’t shy away from what’s fantastic and “cool” for the sake being “artsy.” These are the underlining inspirations that push my hand in times of creation. As I developed my talent and ability to perceive and translate my expressions, I find it’s like a “snowball effect.” The search for beauty keeps me almost enamored with wonder, my mind soaks it up like a sponge, and sometimes it overflows on to paper, on a screen, or in a sculpture.

What are your feelings regarding the local Hawaii art scene? How does it differ from other states/countries?

I’m Oahu grown, so I’ve had the blessing of living in Hawaii my whole life. Growing up in such a vivid environment, you can’t help but have an appreciation for art. Likewise, the people I tend to meet are in touch with their inner artist; I might be biased, but I think Hawaii produces some of the finest artists. Creativity is deeply entrenched in the culture of my home state.

As for other places I can only speculate, yet I keep my ears and eyes open. I hear Austin, Texas is the live music capitol of the world. I’ve been to the Norton Simon Museum in Pasadena, CA. The beautiful thing about art is it transcends boarders. 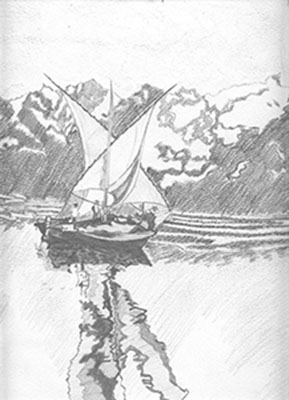 Who are some of your influencing artists? Have these heroes changed through the years? If so, how?

My Mother has artistic talent. I always had outlets as a child; like Light Brite, and Echaskech, Mini chalk boards, Legos and video games. I’ve had my share of “one for the fridge moments”. I would say the first style that had an influence on my art was Anime. Dragon Ball-Z…I got good enough to sell my drawings to the other kids at school. I remember the first time I felt like I had made one of the characters appear on the page in front of me. Krillin, a round head with no nose, and six dots up his forehead. From then on I was hooked.

I went on to discover comic books and the list of influences goes on and on.Jack Kirby, John Romita Sr, Lanky Frank Miller, Todd McFarlane, Jim Lee. and Leinil Francis Yu , Steve Dillon, Joe Quesada, Lee Bermejo, all fantastic and master craftsmen. On the finer side of art there are Frank Frezetta and Alex Ross. If you look any of those men up you won’t be disappointed. 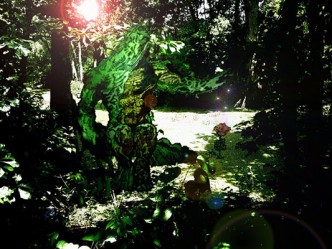 What where some of the obstacles you faced with your craft? How did you overcome them?

When I was beginning to get the hang of comic book drawings, I would bring them in to my high school art teacher and get a critique. He would tell me to stop taking short cuts. I had learned all the techniques for making art expedient for mass consumption. He made me slow down and comprehend what I was drawing. Realize that it was about process, not end product, and if I build foundations and worked on my elements I would be fine. Some of the best advice I’ve ever gotten.

I am interested to hear your views on modern art style verses classical methods. Especially with digital verses
non. What are you opinions on this war? Or is it a war? Can modern /classical styles co-exist?

Another amazing thing about art is it gives a sort of emotional history that co exists with human history; bringing another perspective on how the social climate effects change. The art of the past is responsible for the modern and helps create a swirling effect that has the past influencing the future by association. Hence the battle between Retro and Neo, once one gets popular, the other rolls in to create change and progress is made; avoiding stagnation. For some strange reason an artist who uses the mediums or techniques of his day is considered less of an artist, and this is how the future effects the past. That’s how you get to be “before your time” like Jimi Hendrix, Vangoth, and Alan Moore.

To shift gears. Andy Warhol has once said “An artist is somebody who produces things that people don’t need to have”. I personally favor art as a function over form. Not just art for art’s sake. What is your opinion on this? Can art even exist without having a function? The subtlest Avant-garde piece could change someone’s mindset forever.

Nothing is more necessary than the superfluous. Andy had that “Mr. Glass” thing going on, so he’s kind of a Droopy Dog, but I see his point. That quote comes from a place all artist share. The uncertainty of translating something from your mind’s eye can be nerve wracking, and process is such a personal thing. Some artists are like raging conduits of creation, no stop, just constant flow. Some artists have to plan carefully and nothing is misplaced. I, for one have trouble working in front of people, I feel like a magician and someone is in my workshop, watching me craft my tricks, cheapening them somehow.

If you look up the first examples of art in human history you’ll find that the oldest forms we know of are pre-historic hand axes. The cavemen would carve a tool out of shale rock, a tool for cutting, chopping and pounding, and then he would make it an exquisite example of the tool, showing his keen ability for craftsmanship, and attention for detail. These master craftsmen tools where never used for labor, and some still survive till this day. It would seems that form, function and art all share a common genesis. 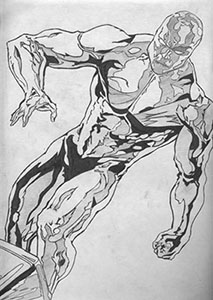 I understand your read a great deal of comics. What current artists /comics would you recommend?

Where do you think comics will be in the next 10 years?

Well, my beloved medium is in the hands of Disney, and Warner Bros. so I’m guessing a lot more movies? The culture will be affected. People will start to dress like superheroes. The age of the superman will begin, Dr Manhattan will unknowingly help Adrian Veidt summon foth dimensional, psychic cephalopods, faining an alien invasion, and tricking the world in to unadulterated peace, while I read about pirates and horror monsters, because superheroes are overplayed. Yeah, it’s gonna get crazy. 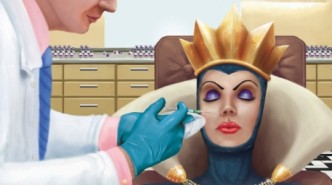 I find that having an actual comic in my hands seems to be a satisfactory tactile experience. Rather than reading the same comic on a computer screen or digital tablet. What are your opinions on Digital comics vers paper comics? Pros/cons?

If I have a book in my hand that I’m interested in, I tend to read it stem to stern. As if I might have missed something, but when I have a digital copy, I tend to skim. I’m not sure why. It might be habit or the fact that if I zoom in on a computer I get pixilation at some point, but I can put the comic up to my eye and see the stroke of the artists’ hand. Digital has always had the problem of carrying the same emotions and memories as its older counterparts.

Finally, do you feel formal training is needed for an artist to make a living at his trade?

Simply put…no. If you have a yearning in your soul to create something for the pure joy of seeing it exist, sharing it with others, and bringing creativity to the world, than you are an artist. Trust me, it’s gonna get out somehow.
How can you be contacted for commissioned work or mentor ship? I have a Facebook page under Allen Wilson, or you can e-mail me at my email